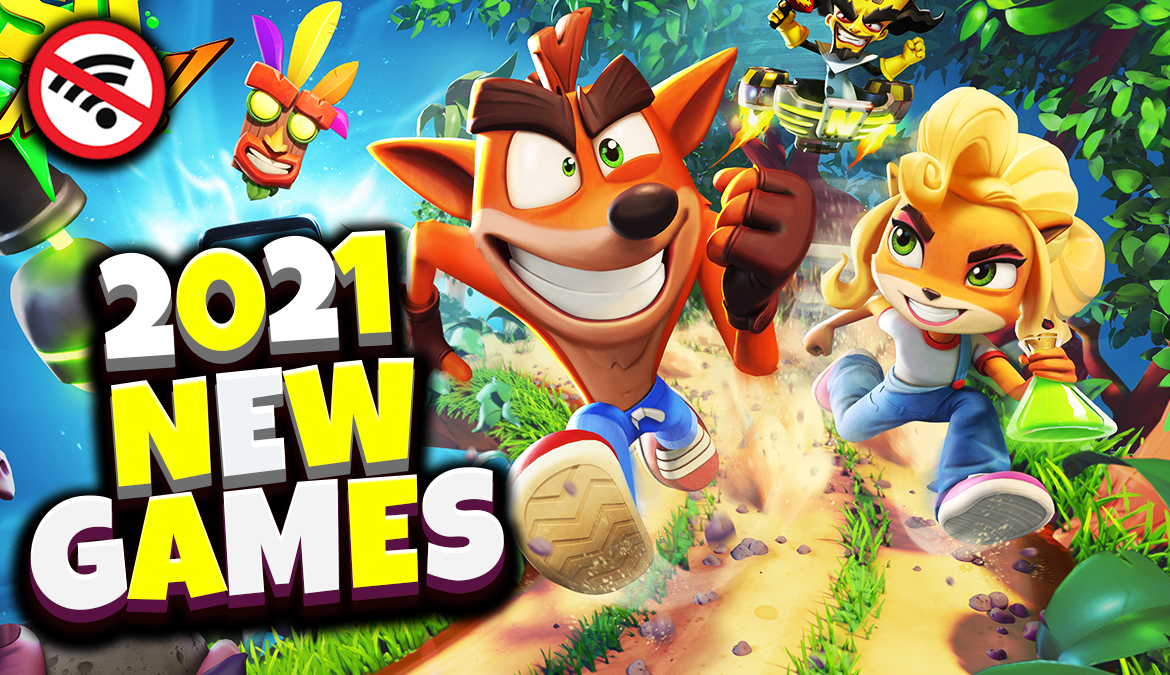 A lot of good new Android and iOS games are coming out everyday, it seems that 2021 is looking really promising for mobile games! So today we’re going to talk about “offline games for android & iOS”

Offline games are one of the most searched games on the mobile platforms. With 2021 is here, we decided to cover not 10, not 15, but 25 NEW offline Android & iOS games of 2021 releases!

Crash Bandicoot is back, but this time he’s on the run and on mobile! That means high-speed battle runs across Wumpa Island to save the multiverse from the evil Dr. Neo Cortex; smash crates, avoid obstacles and run into your favorite characters…Not to mention battling your favorite Crash bosses, earning rewards, base building and weapon crafting – all with a customizable Crash!

The puzzle adventure game QV, which has been receiving many favorable comments, has been launched!

⦁ A game that can be played by anyone – Consisted of four levels per each stage, and a total of 172 levels. No matter how bad you are at playing the game, you can enjoy this game with no problem.

⦁ Unique journey – There are various adventures prepared for you, such as crossing the water by spreading the ink of dimension or passing the road by connecting two walls with portals.

You become a boy and run endlessly. You have to jump over obstacles and go back when you hit a wall and find the right way.

There is nothing in both hands, and sharp thorns and dizzying cliffs stand in the way, with will and quick wit, you can easily get away with it.

RUN as fast as you can to catch your precious eggs! 🥚🥚🥚
Turn yourself into Ed and play Cracké Rush, a free, easy-to-play, high-speed endless runner with zany antics and addictive gameplay mechanics for the whole family!

How far can you get?

Earth as we know it is now on a path of destruction. A sky of constantly shifting colors, floods in places where the rain never stops, and when the snow falls it is gray. All seemed lost until we discovered a mysterious portal.

Join the Angry Birds on a magical Slingshot Adventure to recover the Egg Wonders!

He’s a dad, and a radish, and he’s back in his biggest adventure yet! After an impromptu “Bring Your Kids To Work Day” goes awry, Dadish sets off to find his missing children. Along the way he’ll wade through swamps, ride rockets, climb a big tree, and even visit outer space! Help reunite Dadish with his missing kids in this charming and challenging platforming adventure.

Ninja Arashi 2 continues the legacy of the first ninja game.

In this episode 2, you play as the raging Arashi, who finally escapes from the frozen prison which was created by Dosu, a cruel evil demon. Arashi continues his pursuit after Dosu to rescue his son. However, the journey will be much more challenging this time.

Ninja Arashi 2 isn’t out yet on iOS, but Part 1 is available, try it out

“Samurai 3: RPG Action Fighting – Goddess Legend” is forged in battle! Help the Samurai – Oishi pay off his debt after enemy samurais burn his village kill his family and companions by day and exploring mysterious across the war-scorched countryside.

You wake up in the middle of a crumbling spaceship and yet, somehow, everything’s flooded… You’re at the bottom of the Ocean! The ship computer keeps giving you never-ending tasks to repair the ship and is saying you’re a… Clone? The adventure’s only just begun!

With a simple operation, you can do a great job of steel, spin-move, block, and dunking like a real NBA game!

Enter the world of Reach, a puzzle adventure game about communication and isolation. Help a lonely Shadow go out into the world and find the person sending them cryptic messages.

As they leave their trusty outpost, you must guide Shadow through each room. Using the tilting of your phone manipulate the world so Shadow can continue the search for the Other.

Solve intiguing puzzles and decode cryptic messages to finally discover who the Other is and what they want.

Control the girl and go home. Dad is waiting for you.
It’s already evening. Be careful as the road is dark.

THIS IS THE ULTIMATE AIR COMBAT GAME! With an extensive single player campaign and revolutionary multiplayer modes, the non-stop action will keep you at the edge of your seat!

In this game you’ll play as RYSEN, he’s a live streamer who telecast his parkour skills & getting revenue from it.

You have a chance to become popular live streaming parkour master.
Show your best parkour moves to your in-game followers.

Story of Sammy, a girl blinded in war, and her journey to find her lost parents. Play as Sammy and step into a perilous journey into the unknown, with the help of her seeing-eye dog Deli… Every decision you make will influence her fate…

The fabric of reality is in shreds and monsters are pouring in! It’s up to you to step up to the plate. Bring your biggest gun and your A game, because you’re the… Defender of Everything!

Rampage through levels and shoot the alien scum in the face. Or behind, your choice. Eventually you’ll get yours kicked. Tough. Sucks to be you. But! With the loot you can find, you can get bigger and badder weapons that’ll leave a string of ruined enemies in their wake! By the end, there will be more bullet than air for everyone to breathe.

Epic Conquest 2 is a classic Single-Player offline Action/Adventure RPG with special touch in the combat and story, giving you the experience that’s hard to find in similar genre!

Back in Stickland, lived-was Stickman. And he had a cat, whom he loved very much. They all did together, even bitcoins mined. But one day … the cat was gone. And then stickman realized that the time had come and got a shotgun.

The world around has changed. Green grass withered. The surface was covered with fire. A gigantic hellish cauldron appeared in the distance. Stickman moved to terrible lands when he touched his weapon.

Stunt Car Extreme is the ultimate stunt and trial car game with both entertaining and awe-inspiring tracks.

The levels are divided into three categories based on the skills needed, normal, hard and extreme. Start easy, but make your way to more challenging tracks when you are ready.

Be the last one standing! Become the biggest crowd on the farm by absorbing your rivals and converting the humans. Choose from 22 different adorable animals to play as while you grow your way to the top.

An epic fighting game for casual and veteran fighting game players and free 1v1 fighting game designed for mobile. Choose from the initial 15 playable characters based on different fighting game archetypes and defeat the final boss Meaty Titan. More characters, bosses, & stages will be unlocked in the future.

The game features block-styled cast of fighters merged with anime characters and a crossover gameplay of classic fighting games with emphasis on intuitive controls and simple art style.

ConFusion is an exciting puzzle game with brand-new gameplay, visually stunning art, and a haunting soundtrack.

Take control of the enigmatic characters Veni and Vidi who share an unbreakable connection despite their opposite personality. Veni and Vidi have been trapped in a universe of mysterious planets, where each planet is governed by its own rules. Guide them to find their way home!

ConFusion is still on early access, its not available yet on iOS but here’s a similar game to it from the same developer, its called “PepeLine”

Zombeast is an innovative OFFLINE survival shooter with one purpose: kill them all!

You were left to survive in a city full of mad zombies.
In order to fend off an army of dead you have to become a high-skilled zombie killer!