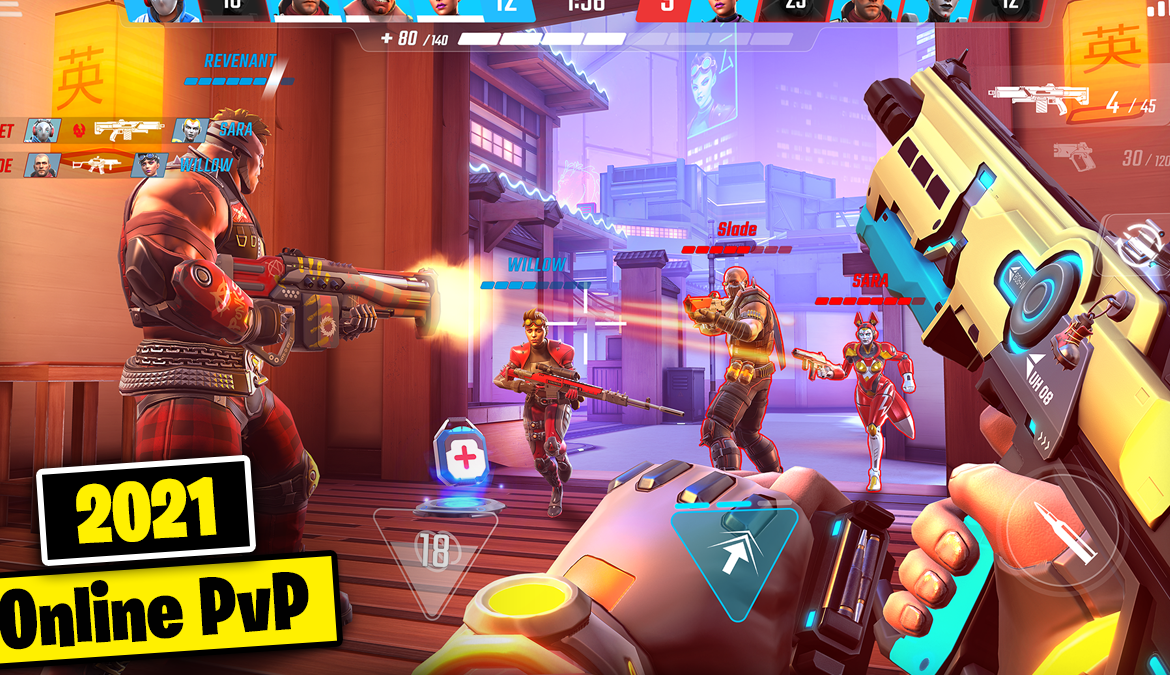 We all love playing shooting games, right? the action, the thrill, the heat of the moment just makes every FPS or TPS game incredible on it’s own way, and what makes it even better is playing those shooter games online in real-time against real player around the globe.

Super Mecha Champions is an excellent battle royale. It has enough of its own personal charm to stand out from the crowd of similar games, making for an all and all outstanding game with anime esthetics and spectacular graphics. Jump into a world of non-stop action that you’ll enjoy either on your own or in teams.

Once again, you’re facing off against up to 100 opponents until only one person is left alive, but there’s a slight twist. You get to feel the thrill of exciting, non-stop matches as you jump behind the controls of gigantic robots — just like in Evangelion.

Modern Combat Versus. Drop into a brand-new multiplayer first-person shooter featuring fun, action-packed gameplay. Choose your Agent, master your role, and dominate the battlefield with your team. From skilled attackers to supportive defenders and covert assassins, there’s an Agent for every playstyle.

if Catalyst Black is not available in your country, you can download it from Apkpure for Android!👇

This is an competitive survival looter shooter mobile game. Here, some become rich overnight while others lose it all. Gear up and get ready to enter the battlefield.

Respawnables Heroes is a genre-defining tactical Hero Action game with the best graphics on mobile devices and thrilling PVP multiplayer 4v4 matches! Build your all-Stars Heroes team with their unique personality, skills and abilities, and play your way across multiple maps and game modes as you engage in jaw-dropping action!

Get ready to discover FRAG PRO SHOOTER, a free shooter game by Oh BiBi! Play explosive 1v1 duels against players from all over the world with this amazing FPS designed for your phone.

Join millions of soldiers in the best action third person shooter on Mobile.
Enjoy unreal graphics, unlock thousands of weapons and gears, listen to the call of war and strike in the battlefield.

An electromagnetic pulse has changed everything. The balance of power is unstable. World leaders are deploying elite squads. It is time to choose. To either restore peace or to ignite the largest conflict war in history!

Online warfare cars shooter wargame! Fight players from all over the world in new FREE PvP action shooter with mech cars. Choose war machine, combat weapons, abilities and blitz into battle. Upgrade and customize your machines according to your taste and combat style. Be a champion of the action shooter warfare!

Infinity Ops is a multiplayer FPS in a sci-fi and CYBERPUNK setting!
The event of the game take place in the distant future, when humanity has surpassed the limits of technological development and the world has descended into the chaos of interplanetary warfare!

Wall-Run, Roll, parkour! Traverse the world in any way to take out the enemy and become the best agent.

Battle players from around the world in crazy WWII-era online combat!
Destroy the enemy and survive vicious tank battles in the center of Berlin and other cities.

Participate in team and deathmatch battles, and plant bombs and defend them.