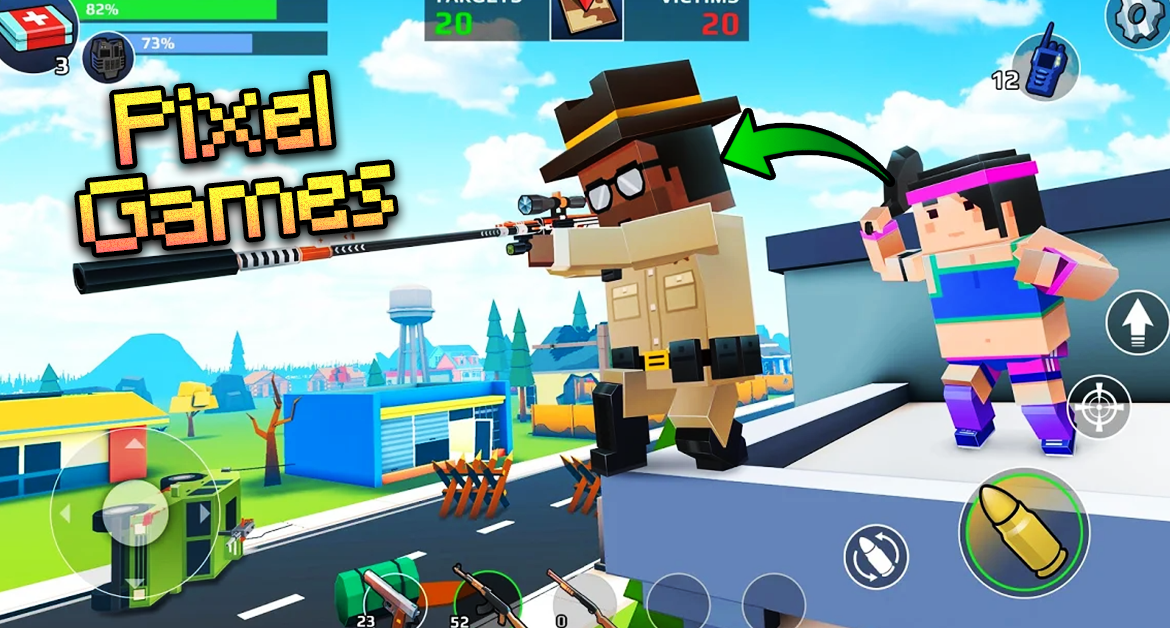 Do you like Minecraft? pff, who doesn’t? Today I’ve gathered a list of 13 online multiplayer pixel games for Android & iOS but in Minecraft style look.

These games contain all kind of modes, whatever you’re into, just name it, these games got it for ya: “Battle Royale, PvP, Zombie Survival, Team Fight, Story Adventure Mode, Play with Friends, and many many more modes that you will enjoy playing if you’re into pixel-like games.

Unite with friends, get your clan to the top divisions, and enjoy valuable prizes. Update and customize your Fort to resist PvE Sieges and create a powerful tank to raid other Clans’ forts.

Imagine this: you wake up, feed your beloved kitty, and then — all hell breaks loose! Where did Mr. Fluffy go and what is… is that an armored turkey and unicorns? Uh, what’s going here? You’re gonna find out in this adventurous shooter entry in the pixel shooting games & battle royale games genre!

Mad Gunz comes from the school of online games that have strange, cute, pixel games art and is just not like all online games for free you’ve used to see!

Pixel Danger Zone is first person online shooter with battle royale game mode. We combined realistic weapons with the pixel world, so many cool skins for your favorite weapons are waiting for you in the game!
Starting with nothing, players must fight to locate weapons and supplies in a battle to be the lone survivor.

Pixel Grand Battle 3D is a multiplayer action online in pixels style. Now you have a perfect chance to battle with your friends, classmates and colleagues or anyone else around the world! Play a fascinating dynamic third-person shooter online with friends and other players online. It is an awesome pocket shooter for all kinds of players! Gather with friends in your team, create a clan and win together in dynamic battles. Buy weapons, upgrade it, change the look of your character. Create your own clan in Pixel Grand Battle 3D!

Can’t get enough mobile pixel survivor shooters? Jump to the island from the chopper, collect loot and hunt down opponents!

BUT! Watch out for the shrinking zone, it does major damage! Shoot from pixel guns, Kalashnikovs, multi-barrel guns and more.

Jump out of the survival plane on the dead island, find the best loot, kill the enemies. Players are spread around the island unarmed and must find and use various weapons and items to eliminate opponents.

Welcome to the modern arena where fast cars, sniper duels and fun bandits war at every turn! Look sharp, shooting is everywhere, there are almost no rules on these streets. Discover a lot of interesting missions about gangsters and cops, bangs, mafia and police. Get ahead of other hunters for coins, weapons and ammo you can find around.

Creative ways of fun and action – that block city might need a little destruction to shake things up. We’ve made everything for fans of tough 3d battlegrounds – plasma guns, destroyer, super rifles, a lot of armor types and many other exciting things, you should try out!

Starting with nothing, players must fight to locate weapons and supplies in a battle to be the lone survivor. Search for weapons, stay in the play zone, loot your enemies and become the last man standing.BUT be afraid of the shrinking zone, it does significant damage! Jump out of the plane into any of the locations – night ford, warehouse, power station or rural area. Shoot with AK, pixel gun, smg, multiple-barrel and other weapons. BE THE LAST lone survivor!

Pixel Fury: Battle Royale in 3D where you can fight against players worldwide! In this FPS pocket edition you can use multiply block guns (from axes to sniper) and play with friends on awesome maps! Join with thousands of players around the world! Pick your weapon and start your duty causing havoc and destruction in this battle thorn environment of Pixel Fury!

Cops N Robbers (FPS) is a pixel style multiplayer gun shooting game developed by JoyDo Entertainment. This is an awesome FPS game of pocket edition. Equip your weapons, join the battle in this cool block world.

If you like Online Shooter , Multiplayer PVP , Single Player FPS and to be a snipers, so This Multiplayer Shooting game is for you

Play for free with your friends a first-person pixel online shooter. A large number of maps, skins, and weapons! Shoot from the tank, AWP, Kalash, multi-barrel, shotgun, and other weapons.

Over 40 types of modern weapons. Choose your tactics for battle: shotguns, machine guns or snipers, or any other favorite weapon.

Pixel Strike 3D is a Multiplayer First-Person Shooter! This blocky shooting game brings fast-paced online FPS gameplay to your mobile device. With PC and Console style mechanics, this is not your average mobile gun game. It’s time to stop crafting and start shooting!