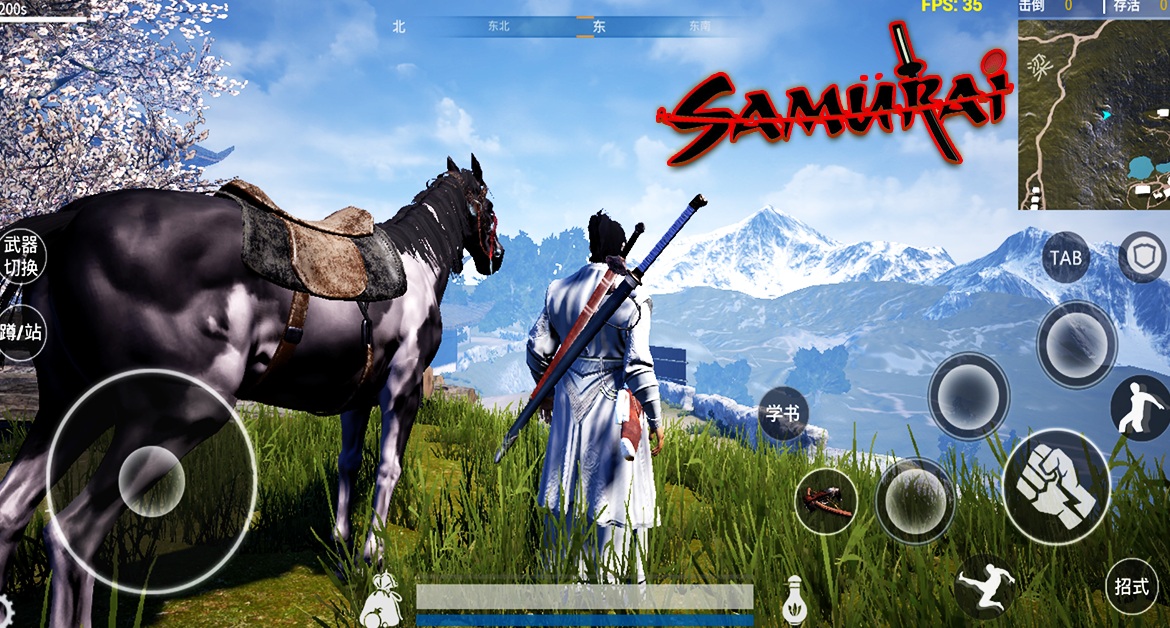 SAMURAI games are one of the underrated genre of games for Android & iOS and it definitely DESERVE more attention. The Samurai games that we are covering in today’s video will blow your mind away with their stunning graphics & Amazing Storylines.

He’s back! Become Samurai Jack, the greatest warrior to ever brandish a katana!

Journey through time and finally stop Aku’s evil reign in this new adventure from the creators of Samurai Jack.

Samurai Jack: Battle Through Time is an action RPG game that spans across time and space, where your actions will determine a new legend!

Immerse yourself in an untold adventure that ties into the epic series finale. Team up with trusted allies from the show to face off against familiar enemies. Defeat ninja foes!

3 – Laughing in the Wind Mobile

The plot section of Mr. Jin Yong’s classic martial arts novel “Laughing in the Wind” will appear like a prophecy. Yingzong wants you to grasp the pulse of the whole river and lake and report it in real time to explore the most mysterious massacre of the year!

Step into the rivers and lakes without being lonely, make friends such as the undefeated East, Linghu Chong, Ren Woxing, etc., chat with them, give gifts, and visit home to strengthen the emotions of both parties. They will become your strongest help.

“The Swordsmen X” is an adrenaline-fueled free-roaming competitive action game that pits 100 players against each other in a battle royale. Players can wield a diverse arsenal of martial weapons, including bows, daggers, and other ranged attacks, in their fight for survival.

Glory Ages – Samurais will transport you to medieval Japan. In the game you get tactical Samurai sword battles, intelligent opponents, all kinds of equipment, numerous locations and even endless mode.

“Moonlight Blade” is a genuine MMORPG mobile game created by Gulong and authorized by the core team of PC online game.

Industry-leading art technology, presenting a magnificent national style like a scroll; dozens of people who can attack NPCs and meet destiny in the moment of red dust; playing cat, cooking, Riding horses, hunting and fishing, real perception of the state of the rivers and lakes; both strategic and strike, Hearty fighting gameplay awaits challenges.

Every moment of your heart is the horizon.

Yi Jian” is an independent original martial arts action mobile game project, players will be in a landscape painting and another swordsman to start a thrilling battle, no attribute battle, relying on the personal skills of both sides, in One stroke and one style are divided into high and low.

Become the legendary samurai cat and cut down endless waves of frog ninjas alongside with your best moew companion!

Neko Samurai is a fast-paced arcade game about slashing enemies and deflecting shurikens. Don’t blink! One mistake and you could be a cat ghost!

Jade Empire: Special Edition is an award-winning action RPG from the makers of Dragon Age and Mass Effect. Experience a unique combination of fast paced martial arts action with a gripping, character driven story set in a mythical land. Each decision builds your reputation, changing the course of interactions with other characters and followers. Take the role of a master of martial arts, and recruit followers to your cause in an interactive, living world.

Takashi is a revolutionary ninja adventure that blends gorgeous graphics, innovative gameplay, and intense boss battles, all within the palm of your hands.

A heroic ninja warrior adventure set in medieval age with hack n slash and rpg elements. An action RPG fighting game where you can be brave warrior assassin. Takashi, one of the best 3D ninja games where you experience a sword fighter Japanese ninja arashi assassin with visually stunning graphics.

World of Sword is a 3D national style martial arts light MMORPG, in which the player, as a disciple of one of the six major martial arts sects, will go into the Jin army to rescue his fellow brothers and sisters and find the whereabouts of the Zhanlu Sword.

Green Glass” is a self-developed indie game developed after Netease’s “Ink · Mountains and Mystery”. It is like a picturesque landscape, thousands of different organ puzzles, and a drastic battle experience. The immersive game soundtrack gives you a visual and audio-visual enjoyment.

13 – Meteor, Butterfly And a Sword

Into the night. The moonlight likes blood, condenses in the sheath.
No one can smell it, no one can distinguish it.
The killer, waiting for an opportunity.

The heart beat is chaotic, What can you do with the martial arts?
Blade out,
Your life will be taken.