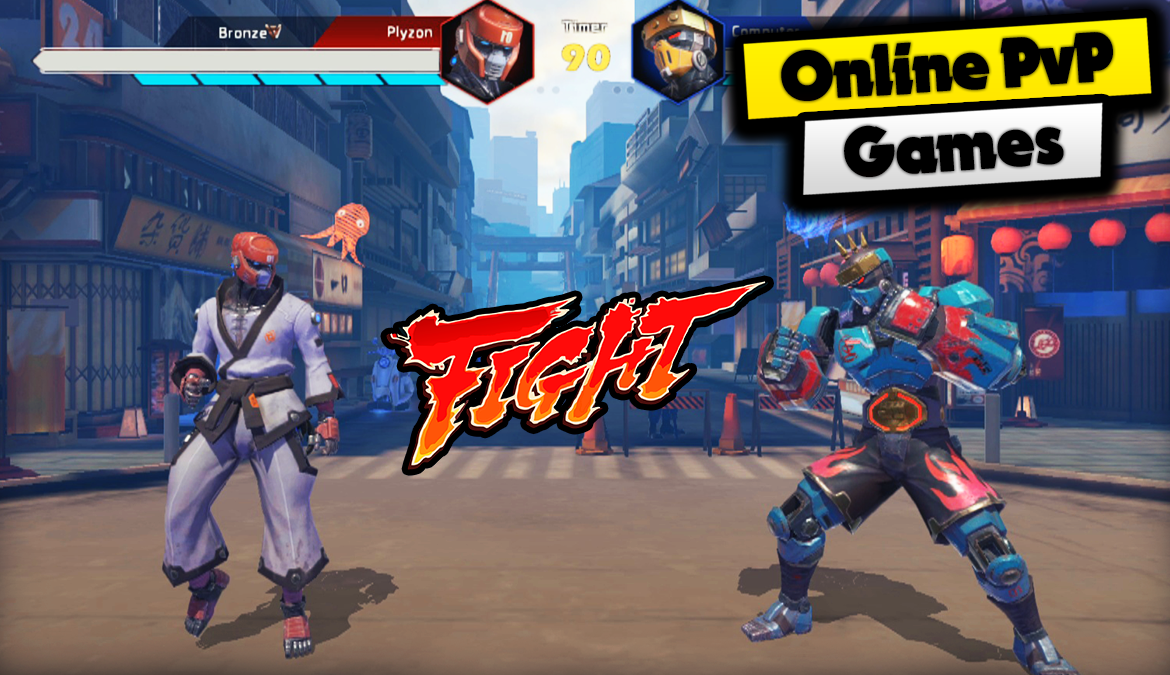 We’ve all played fighting games at least once or twice in our lives, right? our gaming journey all started with such games since we were little, I’m talking about games such as “Tekken, Mortal Kombat, Street Fighter…etc”. These games still going strong till this date, if not stronger than ever.

So today we’re counting probably the best online Multiplayer 1v1 Fighting games to play on Android or iOS in Real-Time Battles. Let’s be real, no one likes to play against bots or AI, it’s all about Real-Time PvP!

if you’re a fan of fighting games and you’re looking for the best online competitive multiplayer fighting games to play in real time, then this video is totally for you! 🙂

⚔️Fight against other players in a free online 3D fighting game. Compete in 2 player PVP combats or brawl for fun with friends. Welcome to the ninja realm! FIGHT NOW!⚔️

Top-level 3D graphics and realistic animations come together to provide you with the best-looking epic fighting action.

Relive the nostalgia of classic arcade fighters in the palm of your hand; no longer restrained to the TV set! Square off against opponents on the move, and perform finger gymnastics to pull off epic moves and combos!

Immerse yourself in a surreal world and exceed the limits of your imagination.

“BlazBlue RR” is a revolutionary 2D side-scrolling fighting game on mobile platform. With its exquisite 2D graphics, orthodox fighting experience and character voices contributed by famous Japanese voice actors, this game is truly a work of art and will leave players awestruck.

The controls are stylish yet easy to master, this brand new touch-and-swipe control system will surely bring the ultimate fighting game experience to the players.

Gladihoppers is a wacky 2d physics gladiator battle simulator where the mix of the 2d physics and regular 2d animation offers a fun and original gameplay quite unlike your average gladiator mobile game.

The combat system features two different battle stances for your gladiator, each with their own directional attacks of varying power and speed that allow for more dynamic and interesting battles.

This exciting action-fighting Robot Boxing and Brawler brings the heroic storytelling and spectacular action from over 100 years of Robot Fighting on to your mobile device! Top the Leaderboards, claim the Championship title and reign supreme as the Ultimate World Robot Boxing Champion. Win big in Versus Leagues & Global Tournaments.

City Fighter vs Street Gang is a fun, excellent retro fighting action game where you can show off your special fighting styles and skills like karate, Kung Fu, Muay Thai, Kickboxing and boxing to the Street Gang.

You will see how to fight hand to hand, unarmed, with your punches and kicks how to use yourself with amazing skill to block the enemy kicks and punches.

Strategize, dodge and fight against real players in real-time multiplayer PvP action and unlock different arenas from iconic locations across the Power. Test your skills against live players worldwide and move up on the leaderboard.

Invictus Lost Soul is an online card trading game that challenges you to face other players from all over the world during thrilling sword battles. In order to win, you’ll need a good dose of skills, strategy, and speed.

Knights Fight 2 is a 3D action game set in the middle ages. This time, you get to control a knight in full armor and take part in exciting one-on-one duels. Plus, you can fight against the game’s AI or even against other online players.