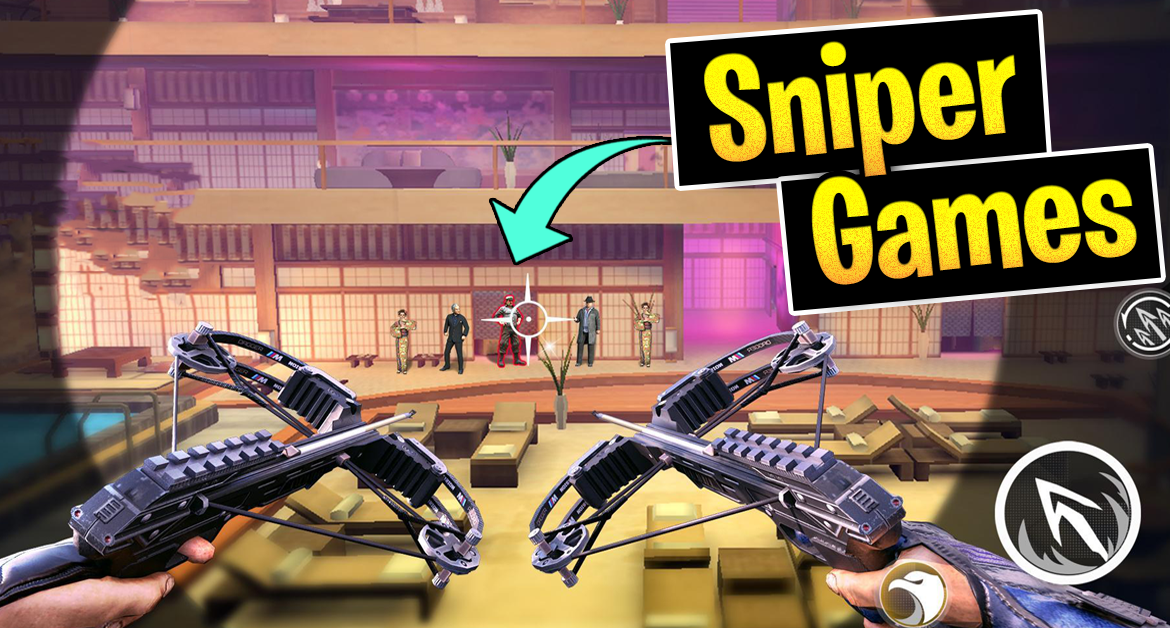 We can all agree that shooting games are one of the best genre and it’s available on all platforms (PC, Xbox, PS4 & Mobile), well today we are going deeper than that, in today’s video we are specifically covering Sniping games. There’s ton of Sniper games out there for Android & iOS but trust me more than 90% of them do not worth spending your time on them.

So i digged down on the Google Play Store to find 10 Sniper games that i think it’s worth playing, hopefully in the future this category can be blessed with even more worthy games!

THE BEST SNIPER SHOOTING GAME IS BACK ON MOBILE !
You have been selected to join a world of assassins and play this early access version of HITMAN SNIPER 2.

Enter the hidden world of assassination, where sniper assassins make a killing by executing the most exclusive contracts for the ICA.

Love online shooting games and always go for the sniper rifle? Get ready for epic sniper games battles against other players. No other guns allowed! A huge arsenal of dozens of sniper rifles and lots of heroes to choose from will keep your itchy trigger finger happy.

Snipe other players in online battles and play with friends! Show the world you’re the sharpest shot online, even against top-class sniper pros.

Sniper! Enter the arena and become the #1 SHARPSHOOTER in this thrilling ‘sniper vs. sniper’ LIVE COMBAT game! Compete against more than 500K SNIPERS worldwide, climb the leaderboard, and ENJOY EVERY BATTLE in this premier mobile experience! Feel the pure adrenaline rush, and lifelike combat emotions in the heat of the battlefield, right in your hands on your mobile screen. Jump into the action and join the battle right away.

Snipers vs Thieves is a REAL-TIME multiplayer heist game! Protect your stash as a deadly Sniper or LOOT your rivals as a gang of filthy Thieves!

CREATE and UPGRADE a deck of epic gadgets ranging from big-head ammo, freeze bullets to the ever-reliable invisibility cloak.

The 2020 hunting season has started! Dust off your gun, travel to hunting locations on your mobile and observe wild animals in their natural habitat. Ready to hunt? Let’s play Hunting Clash – a next-generation shooting game!

Track animals in the wild – deer, elk, grizzly bear, wolf, duck and many more. Choose an animal, aim and shoot! Animal hunter games are a combination of shooting games and sniper arena genres. Get ready to experience the real sniper shooting in the wilderness.

The City is in Great Danger! We need your help, our Super Hero!!

If you’re a sharpshooter: Pick up your sniper guns, Looking for the busters that are our city’s scourge, Take out all of your enemies, and make our city Back to Order.

Fight for honor! Pick up the cool sniper guns at hand and experience the cold-blooded career as a professional assassin! You are the sniper elite and sharpshooter!

Sniper Honor is a real-life 3D free offline gun shooting game with best sniping shooting experience and awesome gameplay. Fight against the gangs in the city, or the highest leader of the criminal forces, everything happens in the blink of an eye! It’s a fun and free elite game with the awesome offline sniper shooting gameplay of 2020 which you can play in the market! You must be a sharpshooter and enjoy the top sniping experience! Justice is calling you, it’s your duty to protect the modern city and resident! Come on heroes!

It’s about time to take on the role of the fearless modern sniper, go hunting and survive in the world overflowing with the wild dinosaurs and bloodthirsty zombies.

The war started! Dinosaurs came back… and bloodthirsty zombies are even more dangerous! It’s about time to find yourself in a new, post-apocalyptic action! The wasteland full of destroyed buildings and dino’s nests – it’s how the modern battlefield looks like. Be careful and aim the rifle, demanding opponents are waiting for you! Focus your eyes on the gun. Modify, upgrade your weapons and become the most powerful elite sniper in the BEST SNIPER: Shooting Hunter Game! Grab your guns and start hunting! Zombie killer games were never so fun and advanced!

Ninja’s Creed is a free fun 3D real sniper assassination game with various types of assassination weapons. You will feel a real powerful shooting experience and top great graphics. You need to hide your identity, secretly eliminate criminal gangs, disrupt underground deals, or assassinate supreme leaders of the crime forces, become the dominator of each region! It’s the No.1 shooting game that combines elements of Ninja assassin in 2020. Lock in target and end the evil with an arrow, become the invisible protector of the city!

Step into the shoes of Agent 47 in Hitman Sniper and play the best sniper shooting game on mobile.

BATTLE ZOMBIES IN DEATH VALLEY
Call on non-stop shooting action as a zombie hunter, in a true battle of your skills and speed of execution.